What is the Secret Behind the Shiatsu Massage?

Outside of our popular Santa Monica Thai massage practices, we at Massage Capital also offer a shiatsu massage. Shiatsu (pronounced shee-ah-tsoo) is a traditional Japanese massage that has been used for centuries to promote relaxation and well-being. While the exact origin of shiatsu is unknown, it is thought to have evolved from other forms of Chinese massage. If you have always been curious about shiatsu and what it is all about, read on and learn more!

Shiatsu (指圧), formerly known as Amna no Shiatsu, is based on the theory of balance in the body’s energy, or qi, and uses pressure and finger strokes on specific points along the body to restore balance. Though the Japanese technique dates back to 2400 BC, the title of the “founder” of the practice is accredited to Tokujiro Namikoshi (1905-2000), who came up with the term in the 1940s. During that decade, he also founded the Tokyo Shiatsu College, which was the very first shiatsu-designated college in the city. The acclaimed practice spread through Asia before eventually making its way into massage cultures in other parts of the world, such as Thailand and India, where they began using stones instead of their hands which formed what we know now about shiatsu massage!

You just need to find the areas that need the most attention, which may be sore or painful for some people because they’re out of balance with their energy. Shiatsu might help restore this flow by applying strokes in different patterns on those specific spots without actually touching them so as not to damage any existing injuries but rather to release tension all around them. The shiatsu massage is not just for your physical health. It can be used as an aid in activities like meditation and yoga, which aim to replenish the body but also components that make up our essence: our mind and spirituality.

Shiatsu can also be a fantastic option if you are interested in a Santa Monica couples massage. Why not take your partner in for a session that will not only untie those knots in your back that you have accumulated over time but will give you both an opportunity to lift up your spirits? When you think of a typical date idea, your go-to is probably something cliche, like going to the movies or out to an expensive restaurant. Why not think about the box a little bit and go out for an hour-long massage evening next time you’re stumped on what to do next?

If you are still curious about shiatsu and want to give it a try, do not hesitate to get in touch with one of our trained professionals at any time to find out more information, no strings attached (or tied). In the meantime, if you have not yet come in for our famous Santa Monica Thai massage, now couldn’t be a better time! Go ahead and schedule an appointment with us by filling out the contact form here on our website or calling us at (310) 928-9851 today! We can hardly wait to have you in! 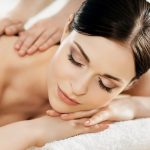 Why is Couples Massage in Santa Monica a Good Idea?